Thank you for confirming your email - You will now receive updates regarding Alix.

BCN/REM: The Giant Next Door

The Sonora Lithium Project in northern Mexico, owned by Bacanora Minerals Ltd. (BCN) and Rare Earths Minerals PLC (REM) (a partnership referred to as BCN/REM), was a greenfield lithium discovery from 2010 that is now being fast-tracked to production. The Sonora Lithium Project comprises three large lithium resources (La Ventana, Fleur – El Sauz, Megalit) hosted in lithium-bearing hectorite and polylithionite clays within a volcano-sedimentary sequence. BCN/REM has also identified several other stratabound tuffaceous horizons over their property, which are prospective for lithium.

The lithium-bearing sedimentary sequences are reported to be readily distinguished in the field from surrounding volcanics and traceable at surface for large distances. On the La Ventana concession, lithium-bearing clay units are traceable at surface for 3.6 km, and through drilling for 7.6 km onto the El Sauz concession. REM reports 40 km of continuous to semi-continuous lithium bearing clays at the Megalit target.

Alix has applied for large concessions contiguous with both the north and south boundaries of Bacanora’s property, covering the interpreted strike extensions of the favourable lithium-bearing horizons. 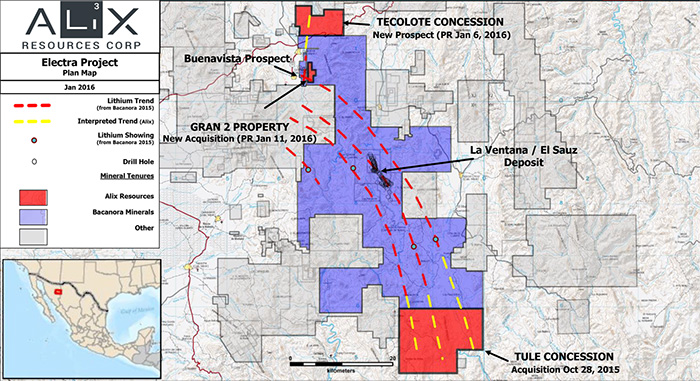 Alix's Tule Concession represents the southern portion of the Electra Project and comprises 18,125 hectares (approximately 15 kilometers east-west by 12 kilometers north-south). Recent BCN/REM presentations illustrate a series of four lithium-bearing beds that are interpreted to extend for several kilometers to the south of the BCN/REM property. Alix's Tule Concession covers the extension of three of these lithium-bearing horizons.

The mineralized trend on the BCN/REM property has been interpreted to extend approximately 15 kilometres SSE from the La Ventana Lithium Deposit to the location of another lithium prospect, and at least an additional 12 kilometers from this point, towards the Alix Tule Concession.

Alix's Tecolote Concession is the northern component of the Electra Project and is located north of the Buenavista Concession at BCN/REM's Sonora Project and north of the village of Huasabas. The concession covers approximately 4,500 hectares. Intercepts from 11 of the 24 reverse-circulation (RC) holes drilled at the Buenavista Concession returned values in excess of 1,018 ppm Li and as high as 2,210 ppm Li (equivalent to 0.54% and 1.18% LCE, respectively) in a lithium-rich stratigraphic trend interpreted by Bacanora to extend north, through Alix's Tecolote concession (Bacanora PR, Jan 14, 2015). Alix's Tecolote concession covers approximately 7 kilometers of this interpreted stratigraphic trend.

The host rocks on BCN/REM's Buenavista concession are calcareous, fine-grained sandstone to mudstone intercalated with tuffaceous bands that are locally gypsiferous. The stratigraphic controls and strong bedding of the volcano-sedimentary sequences are projected to be traceable for long distances north of Buenavista concession.