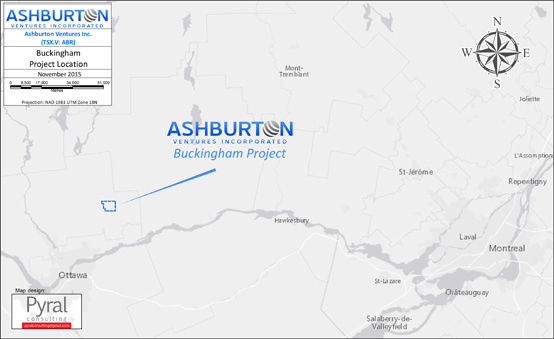 The Buckingham Graphite Property consists of 18 CDC claims acquired through an option agreement with Cavan Ventures Inc. (15 CDC claims) and through staking in August 2016 (5 CDC claims). The Property is readily accessible by roads from the village of Buckingham and is 100% situated on private land. Previous exploration took place on grounds that are owned by logging companies, over which several past and present logging roads facilitates the access. Local resources and infrastructures are available nearby, with the Outaouais Electrical Substation located 7km south of the Property and Highway 50, running east-west, about 10 km south of the property. 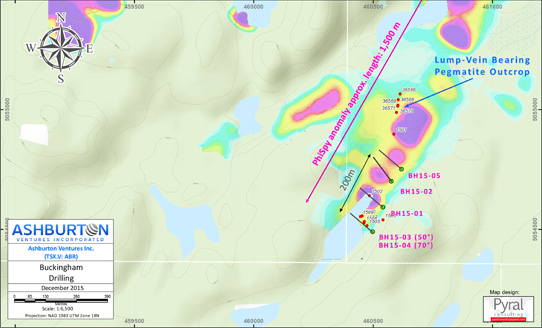 The Buckingham region is historically known for its numerous small graphite mines that were operated in late 1800’s and early 1900’s. The Walker Mine, located 1 km SE of the property, produced flaky and vein type graphite. In 1982, a EM heliborne airborne survey defined two linear and parallel conductors oriented NE-SW, located in the SE portion of the Property and a strong conductive zone of smaller extent in the south-central part of the property. Limited follow-up works were undertaken by the Ministry of Natural Resources and Stratmin during the period of 1984-1987 over the small conductive zone while exploration works focusing over the two linear and parallel conductors started only in 2013 under Cavan Ventures Inc with a geophysical survey and prospecting works. A heliborne survey resulted in the definition of seven strong anomalies and further definition of the two historic linear conductors: to the east, a strong conductive and magnetic zone extending over 1 km and oriented 30-35° (the NNE conductor) and a few hundreds of meters to the west, a smaller conductive zone extending over 300 m and oriented 65-70° (the ENE conductor). These works were followed by a limited PhiSpy survey as well as trenching over strongly conductive zones defined by the ground geophysical survey, at the southwest end of the NNE conductor. Two trenches returned mineralized intercepts, including 8.2% Cg over 4.75 m (trench T1) and 21.6% Cg over 14.5 m (trench 22C). In April 2015, a bulk sample (20 Kg) from trench 22C was submitted to an initial flotation test of the graphite. With a head grade of 20.7% Cg, the bulk sample returned 32% of the flakes ranging from large (+65 mesh) to jumbo (+28 mesh) size with a purity varying from 94.8 to 96.1% for these large fractions.

The property lies in quartzite-rich domain of the southern Central Metasedimentary Belt (CMB) of the Grenville Geological Province. It is mostly overlain by different types of paragneisses, quartzites and more or less pure marbles/calc-silicate rocks. Marble outcrops are seldom observed as it is a soft rock that is easily weathered and usually found at topographic lows. Nevertheless, marble/calc silicate rocks units were found in significant amount in the drillcore and a few unmapped marble occurrences were noted on the property 3 with enclaves of surrounding rocks. A zone of graphite veins hosted in pegmatites and extending for 80 m in length was found along a creek running parallel to the linear conductive zone and with evidence of a deformation zone (slickensides, mylonites) were observed in the vicinity of these veins. Most of the graphite mineralization is hosted in marble and some very high grade short intercepts (up to 20-25% Cg) may occur either in the middle of this unit or near the contact with adjacent units. Lower grades over significant lengths were also found in a garnet paragneiss. Graphite flakes are variable in sizes within the marble (from small to large flakes) whereas higher proportions of large (1-2 mm) graphite flakes are observed on a visual basis within the garnet-paragneiss. The graphite mineralization is related to a disseminated flake graphite deposit in marble, which would be formed at least partly by a metasomatic or hydrothermal process. The linear shape of the conductive zones, the evidence of faulting along a creek running parallel to the longest conductive zone indicate that a deformation zone might be related to the metasomatic/hydrothermal event and that the cooling of C-H-O fluids may have contributed to the graphite mineralization of the deposit along with a diagenesis process (or graphitization) of carbonaceous material present in the sediments.

Ashburton Ventures Inc. has carried out exploration at the Buckingham Graphite Property since 2015 and included prospecting, grab sampling, ground geophysical surveys and drilling over the two linear conductive zones in the southeast portion of their property. The ground geophysical survey consists of a ground TDEM PhiSpy survey that was carried out over 36.3 line km in November 2016. Three ensembles of conductive zones, two respectively located at the SW and ends of the NNE conductor and one over the ENE conductor were considered as prime target. Nineteen (19) holes were drilled during three drilling phases, totalling 4782 m and 1695 core samples were sent for assays of graphitic carbon using the LECO method at the laboratory of SGS of Lakefield. The first drilling phase was carried out in November and December of 2015 and focused on the SW end of the NNE conductor with 5 holes distributed over 300 m along a line parallel to the conductor. The second and third phases were performed in the summer and fall of 2016 and tested an additional 500 m of the NNE conductor with nine additional holes. In addition, four holes tested the 300 m long ENE conductor and one hole was drilled to test a conductive zone defined by the ground PhiSpy survey. Mineralized intercepts were mainly hosted in marble and ranged from 1.4% Cg over 5 m (BH16-05) to 4.07% Cg over 112 m (BH15-03) for the NNE conductor. This intercept was found between 112 to 224 m and included smaller intersections of higher grades (11.20% Cg over 7 m from 166 to 173 m and 8.45% Cg over 5 m from 198 to 203 m). This hole was ended at 224 m, in the mineralization. As for the ENE conductor, an intersection of 5.18% Cg over 70 m (BH16-06) was returned, although the extension of this mineralized intercept was not found in the three subsequent holes that were drilled more to the west.

Grab and drill core samples were sent to SGS Canada Inc. of Lakefield, Ontario, an accredited laboratory according to the ISO/CEI 17025:2005 Standards. A QA/QC program was implemented for the drilling programs of 2016 and consisted in the insertion of 60 duplicates, 33 blanks in the batches of samples sent for assays. Two standards, a low standard CDN-GR-1 (3.12% Cg) and a high standard GGC-04 (13.53% Cg) were used as reference material and totalled 17 additional control samples. Duplicate samples showed a good consistency, with an average variability of 10%, and mostly below 25% for all the paired samples. No graphite content was detected in 30 of the 33 blanks and the 3 detected values were mostly close to the detection limit. Standard (CDN-GR-1) returned values with a difference generally not exceeding 0.08% Cg in absolute values. Standard 4 (CCG-04) returned higher variability with a difference in absolute values ranging from 0.23 to 1.27% Cg. The overall performance of the control samples is considered to be satisfactorily. The assay results delivered by the laboratory are therefore considered to be reliable for the purpose of this report.

The region experiences a revival of graphite exploration since 2011 and significant portions of the Buckingham and Lochaber Townships were mapstaked, wherever permitted. Two graphite properties, the Walker Lump Property of Saint Jean Carbon and the Buckingham Property of CKR Carbon Corp are respectively bordering the east and south limits of Ashburton/Cavan’s Buckingham Graphite property. These two properties were subjected to intermittent exploration works during the period of 2013-2016. In 2016, Saint Jean Carbon Inc. and CKR Carbon Corp. conducted an airborne survey over their respective properties. CKR Carbon Corp. carried out trenching works in November 2016, focusing on the newly defined conductive anomalies. In the regional area, the most advanced property is the Lochaber Graphite Project,14 km east of the Buckingham Graphite Property. A maiden resource estimate was completed by SRK in 2015 and inferred mineral resources of 4MM tonnes at 4% Cg for an included total of 160 000 tons of graphite were modelled, based on 8,200 m drilling program.

The style of mineralization observed at the Buckingham Graphite Property indicates that the deposit is a metasomatic like graphite deposit in marble and seems to be associated with a sheared zone. Therefore, the complexity of the geological context for this deposit may require an increased density of infill and step-out drill holes to meet sufficient confidence for an eventual model calculation with indicated or measured resources. Several mineralized intercepts likely be controlled by the presence of marble beds and lithological contacts between marble and paragneiss were returned with most significant ones near the southwest end of the NNE conductor. So far, the 19 holes drilled at the Buckingham Graphite property were mostly distributed at roughly 100 m intervals, along the length of the linear conductors with traces perpendicular to their strike. Each section line includes only one single hole, which is not sufficient to document the lateral extension of mineralized intercepts that were found. Nevertheless, a preliminary conceptual model for the mineralization is modelled and consists of two mineralised marble planes (MBR-1 and MBR-2) of similar direction (30-35°). MBR-1 would be more important and steeper than MBR-2, with a dip of 50-55° compared to 30-35°for MBR-2.

The technical contents of this page were approved by Isabelle Robillard, MSc, P.Geo., a qualified person as defined by National Instrument 43-101.